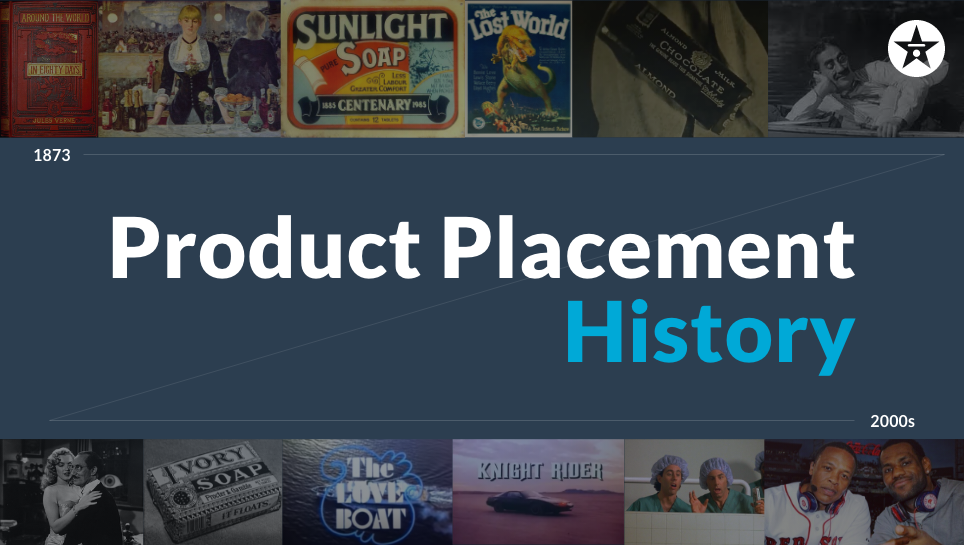 This is what we are going to cover for the next few minutes of your reading time. Here, you’ll find some useful information that will entertain, give you something to talk about with your marketing folks, and help you make some progress in your advertising goals. So, whether you sell your products on ETSY, work as a creative director in an advertising agency or hold the keys and responsibility at a marketing department of a large company, there ought to be something here to sink your teeth into.

Product Placement History:
How and Why it happened

The early days of product placement in TV.

First of all, product placement and brand integration is not new. What is new is the barrel media is holding brands over in order for a deal to be struck. So, we can talk about why soap operas are called what they are and that’s how numerous brands sponsored TV shows in the early days, but that’s not really what people want to do these day. What they want is for their brand to be a star. ‘The Love Boat’ was basically an hour long commercial for Princess Cruises. There’s really no telling how or why Spelling chose to use this brand, but there’s no question that millions of people probably booked trips on that cruise line because it was the only one they ever knew about. A Pontiac Trans Am is for sure cooler because people thought there’s a computer on board that talks and gives it a turbo boost just like in Knight Rider.

The 90s and 00s of brand/product integration:

Things got interesting. No question that most people here remember Junior Mints in Seinfeld, Apple in Modern Family and so, so much more. That’s because TV started to change mostly because of TiVo and the power of the DVR. People started to cut out commercials (aka cord-cutting) and live TV altogether. Brands had to get their product featured inside the content in order to reach an attentive audience.

What people didn’t expect was this would completely upend how this business was looked at. Words like “sellout” almost vanished. Celebrities, directors, and writers not only gained respect and cool factor by getting deals, they felt like losers if they missed out on this huge new revenue and fame stream. BMW paid through the nose to overtake Aston Martin as the new Bond car in order to release their new Z3 roadster and that influenced brands like Ford to make a push to be the official car of dozens of TV Shows. Oddly, one of the biggest players in this space were sunglasses. Oliver Peoples, a smallish luxury brand, stopped all print advertising and only focused on brand integrations. The web searches around which glasses TV characters wore this brand made them the #1 luxury brand of sunglasses in the U.S. All this action makes you realize just how much this would have changed earlier TV. There’s no doubt ‘Friends’ would have taken place in a national coffee chain if the show started today. Today, there’s almost too many to count.

Today you can’t watch any content without seeing a product in the scene. 100% the game-changer for this was Beats By Dre. They were able to make their way into so many TV shows with ease… mostly because the shows actually felt they were cooler because the headphones were in their show. Not only that… and get this… if someone was wearing headphones that weren’t Beats By Dre, fans would notice that the show was unrealistic because everyone who was anyone had on Beats. So, in truth, the brand integration helped with the reality of a show. You can still watch ‘The Voice’ and see a cup from a sponsor in front of a judge. You can’t watch a sports broadcast without seeing Hyundai on the NFL or a Chevy drive on the field after a big baseball game.

RELATED: What is Branded Entertainment

The one thing to take away from all this is the 180 the business of it has changed.

TV producers used to have to beg, sneak and pay brands to be in their content. Blocking out logos, hoping for donations of products… it was a wild ride. Working in this business for so long, there are way too many times to count where brands would call TV shows, commercials and articles upset that their product was used without their permission. They would write letters, have lawyers call demanding to be paid for using showing their marks in content.

Now, of course, it’s a massive business. $39 BILLION dollars will be spent yearly by brands to get in content. How much has it changed? Just a couple years ago, working with an actor… who will remain nameless, he shared a story on a talk show that he happened to eat (not even like or love) some Fritos corn chips. The next day his agent called and said 12 cased of chips were waiting for him in her office. That’s a far cry from demanding money.

So now you know how it worked, but how does it happen?

The short answer is of course what it always is: Money. But the reality is contacts, relationships and connections. Nearly all the content you see on any screen or words coming out of any persons mouth is for sale. Think about that in terms of how many screens and speakers there are.

From blockbusters to podcasts it’s pretty incredible. So, the reach and scope a marketing professional needs is impossible to cover every opportunity. Most production studios have branding days where they go over what is set for the next year. Talent has agents that are waiting by their phone at all times hoping it rings when they are calling to reach marketers. Meetings are taking place all the time at ad agencies who represent big brands. It’s a beast of a business. Once a spot in a movie or show strikes the interest of a marketer, that’s when deals get made and the hustle starts.

The basics of a deal

Like most things these days, once the connection has been made the actual process has been simplified. The calendar is probably the most important term. Productions can range from 3 years out to really the next day. So the timing of the product marketing and the production is key. From there, the financial terms are determined and set. Then, the creative part of the deal is worked on: How the brand will be seen, spoken about, and who it will be associated with. Will the star eat it? Will it be in the background? The list is endless and it’s always a battle between the person who cares about the brand image and the actual person on screen to make sure ends meet.

We have all just seen how brands can become household names. But, like most things the expertise in the background makes it happen. The key is to jump in. Start looking for deal. And be careful with money and your product. The good news is it works. Really, really well.