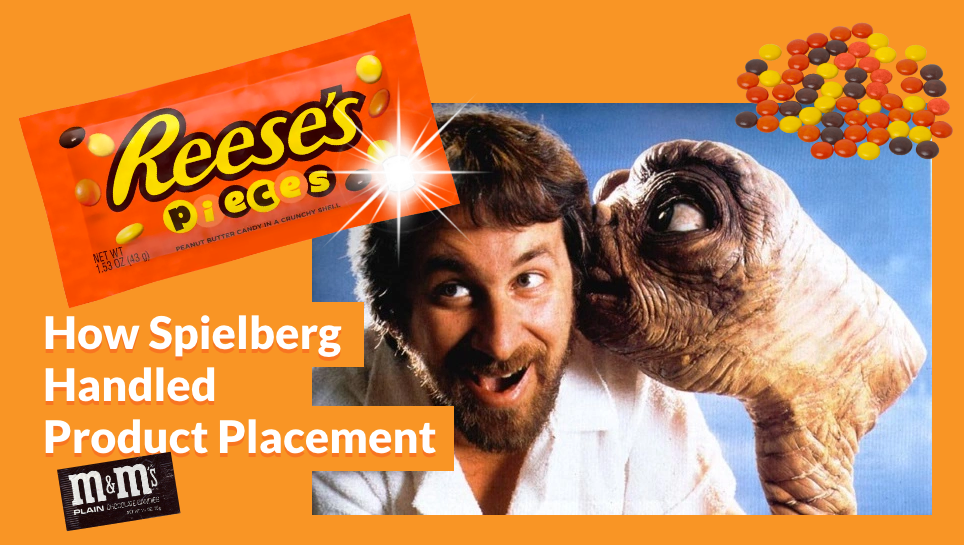 There are lots of lists of great brand integrations in movies and TV shows. But if you are reading this, you are probably trying to do it yourself so this list will talk about WHO made these integrations happen and end with some good news for anyone trying to do it today.

Directors wanted to their movies to feel authentic so they wanted real life products to appear in their movies. The most epic example of a director making this happen for themself was in the 80s blockbuster movie E.T.

The story isn’t only crazy because it was really an early example of a movie making a product a star, but also the twist that it took. Steven Spielberg had an idea for a Hansel and Gretel type shot using pieces of candy in a trail to lure the alien into the boy’s home.

Of course, at that time, M&Ms candy seemed like an ideal choice. It was ubiquitous, colorful and would make a tiny audible crunch to let the audience know the bait was being taken. So, here, the director had the idea to use a real snack to make this scene feel real. Why? Well, the scene was out of this world, he wanted it to feel everyday, in reality and something the audience would connect do. Genius. They would probably even be eating them in the movie to make it extra perfect… sharing a candy experience with an alien!

So, Mr. Spielberg had his production team reach out directly to Mars Candy company to strike a deal with their head or marketing. At that time, there wasn’t anyone in brand integration or anything like that. Since their marketing hadn’t ever done this before, he asked for a script to understand the vision. So far, it’s a massive director asking a major candy company to do a deal. Seems reasonable. But here’s the snag… the marketing guy was opposed to a creepy alien getting their slimy hands all over his beloved candy. SO HE DENIED IT!

Spielberg was shocked and was already set to use this type of candy. Small. Easy to spot. Colorful. Small crunch. So his team found something very similar… the Reese’s Pieces peanut butter equivalent of M&Ms.

Knowing the power of film and genius of Spielberg, they jumped at the chance. Within days this movie was a global hit and the candy co-star was launched into instant fame. So, in the earlier days of product placement, it was handled by the highest level of professionals. Oddly enough, even they screwed it up.

Similar Product Placement in the Age of Music

The age of big brands knowing the power of product placement really reached the most epic of levels when Jimmy Iovine was at the helm of Beats by Dre. This wasn’t any ordinary effort of getting a product into a movie or a TV show. This was an all out onslaught of integration. Never before in the history of product placement had anyone in marketing seen the amount of athletes, movie stars, musicians, movies, or TV show characters that were wearing a pair of these headphones. In fact, Iovine and the team at Beats by Dre were so good, they were even able to get this product into a commercial of another brand. How do I know…well,… I worked there at the time.

So, unlike the beginning when a director wanted his film to feel more relevant and realistic, this was a genius move by a marketeer who realized that being relevant and adjacent to every pop culture moment possible was the perfect way to make sure that their product was THE thing to be seen and be seen wearing. Every string was pulled. Every effort of leverage was used. It came to the point where people begged to show them off. There was even a point when 14 of the top 25 music videos had a pair of Beats headphones in them. The news was out. Product placement was the new standard. Getting your brand in an entertainment scene was a must.

Nowadays, every small, medium, big, global brand knows they have to use product placement in some way shape or form. We all see it daily. Yes, almost all movies have real products in them. Yes, several music videos show a singer driving a car or drinking a drink. Yes, even athletes walk into arenas wearing something or another they are paid to rock. But it gets more. Your social media feed is filled with brands you haven’t even heard of. That is because anyone who has started or is marketing a brand has it on their list to get it shown by someone who gets eyeballs.

HOLLYFY was born and built to enable this entire new army of marketing execs to use the power product placement. It is easy. Powerful. Streamlined. Accessible. Best of all, like you, it is open for business. Let’s get going. Let’s make noise. Let’s make sales. Let’s go HOLLYFY.

Why our software update is named after “The Matrix”