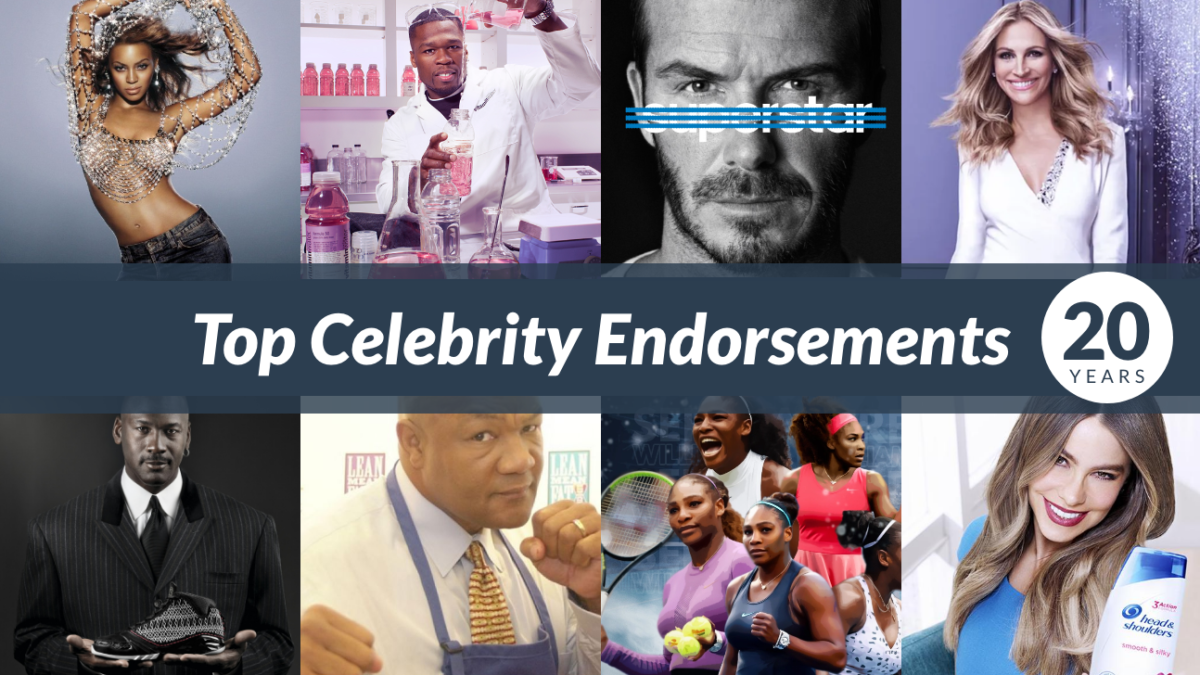 Yes, the rich get richer. But the idea behind a celebrity endorsement is to help a company increase brand awareness and therefore increase/sustain sales. Celebrities are able to give a brand both visibility and viability on the screen; and off. Basically making them worth their weight in gold.

Michael Jordan may still be #1 on the highest paid celebrity endorsement list of all time for his deal with Nike, but no one will feel bad for anyone else on this list. And if you are a sneaker head you still will travel far and wide, and gladly open your wallet for the right pair of Air Jordans. The first pair was released to the public in 1985, and yes, that is 37 years ago. But guess what? The latest Air Jordan XXXVII (37) was released on July 28, 2022, which makes this endorsement continue to fly high.

Have you heard of Salton Electric Grills? Probably not. What about the George Foreman Grill? I have one, and I have to say I still love it. So do millions of other people. The “Lean Mean Fat-Reducing Grilling Machine” and many varieties of it (made by Salton) have sold more than 100 million units since 1994, making the former heavyweight champ an estimated $200 million, placing him at #2 on the celebrity endorsement list. And though there are several stories of how it went down (or didn’t), rumors are that WWE legend Hulk Hogan passed on the opportunity (or missed the phone call).

Soccer legend David Beckham has endorsed brands such as Burger King and Samsung, but in 2003 he signed a lifetime endorsement contract with Adidas worth $160 million. Though he is retired from playing, he is still actively in the public eye and clearly worth his weight in pounds, dollars or however he was paid. I’ll take that kind of retirement.

Sofia Vergara has earned $157.5 million since 2011 thanks to brands like Head & Shoulders, Pepsi, Quaker Oats and CoverGirl. And speaking of Pepsi, they seem to love the musical artists as they paid Britney Spears $50 million in 2001, and Beyoncé the same in 2012. Michael Jackson and Ray Charles also had major deals with the soda company.

50 Cent was an investor and part owner in Glaceau (the brand that founded Vitaminwater) but sales were boosted when he endorsed the product and pocketed $60-100 million to do so. Now that’s a drink that goes down easy. Perhaps that’s why Coca-Cola bought the company in 2007.

In 2010 Julia Roberts star was rising even more, which allowed her to renegotiate her deal with Lancôme, putting her earnings above $50 million. Charlize Theron signed an 11-year, $5 million-a-year contract for Dior’s J’adore perfume. And another, possibly retired athlete, Serena Williams signed a monster deal with Nike worth $55 million. It’s good to be the Queen.

There are many more celebrity endorsements that could be on this list, but this gives a taste of just how much the top deals have paid the famous to be a brand ambassador and represent a product or company. Life is good. The rich get richer, but hopefully that wealth gets spread around.

Wanting what you See & Hear: Product Placement in Music Videos