Acclaimed producer/director/screenwriter. Latest feature film, FORCE OF BLUE. Jeffrey focuses on the impact of college and high school athletics.
More details at the end of the article.

Quick Summary How college athletes can earn as influencers.

In June of 2021, The United States Supreme court ruled that the NCAA was in violation of federal antitrust laws by not allowing college athletes to receive certain types of compensation. It had been the argument of the NCAA that college athletes are amateurs and should not receive compensation, even for educational related expenses. The justices threw a flag and called illegal procedure on the NCAA, with Justice Brett Kavanaugh stating:

“Everyone agrees that the NCAA can require student athletes to be enrolled students in good standing. But the NCAA’s business model of using unpaid student athletes to generate billions of dollars in revenue for the colleges raises serious questions under the antitrust laws.”

With many states like Florida, Alabama, Georgia and Texas, approving laws to govern how college athletes can earn money while playing in school, the NCAA saw the writing on the wall and lifted the restrictions on athletic payments, opening the door to a brand-new horizon of business opportunities for the athlete and the shrewd entrepreneur – Name, Image, and Likeness (NIL) deals. With the NCAA being the governing body for practically all the major institutions of higher learning in the U.S. who have athletic programs and with roughly 480,000 athletes who participate in NCAA college athletics, it can be argued that there hasn’t been a better landscape for potential new business opportunities since the 90s and the birth of the internet. Granted, Joe Blow at the University of Iowa probably won’t get $10,000,000 in start-up money from an investor in the Silicon Valley to market the starting right tackle on the football team, but for a young person with internet savvy and a hustler’s instinct, this is your time to shine.

Since the majority of states and the federal government have yet to pass laws guiding how NIL will operate, and the states that have passed them, interestingly enough, have powerhouse football programs that are hoping their universities will reap the benefits from their legislative creativity, there will be a lot of opportunities out there for student athletes to make money in a variety of ways. It will really depend on how cunning the athlete or his/her representative is and how much drive the athlete or representative has.

All the universities that make up the Power 5 football conferences of the Big 12, Big 10, SEC, ACC, and Pac 12, are putting together NIL departments to help brand their athletes. NIL opportunities for athletes will probably be the main reason many recruits will choose one university over another. Undoubtedly, schools like USC, Alabama, Ohio State, and Texas will have the most to offer recruits. They have major media deals, strong local fan bases, and years of prestige and history behind them that will automatically attract business partners for athletes to be connected to. Football and men basketball players will probably see the most lucrative opportunities mainly because those are the two cash cow sports for almost every Power 5 college athletic department. But this doesn’t mean that Nicole, the soccer player who is attending Lehigh University can’t make a little pocket money and gain celebrity status around town.

Going way back to my childhood days in Minnesota in the 1970s (I’m dating myself), a time when the Minnesota Vikings were one of the most popular pro franchises in the country, they had several household names – Carl Eller, Chuck Foreman, Allen Page, Fran Tarkenton, the list goes on and on. Those were the players who were high in demand for endorsement deals and public appearances. But there was one Viking, no one knew what position he played, or where he went to college; Matter of fact, I don’t ever recall him getting in a game. His name was “Benchwarmer Bob” Luertsema. Somehow, someway, he was able to strike up endorsement deals with car dealerships, banks, stores, and restaurants. He was not the most noticeable player on the field, but he sure was off the field. Benchwarmer Bob recognized that his strength wasn’t what he could bring to the team as a player, he was mediocre at best, but what he could bring to the team off the field with a persona and an image that endeared him to everyone in the state.

Why do I bring up Benchwarmer Bob? The Bob Luertsema story should be a model for every college athlete who wishes to get into the NIL game. It’s not always about your success on the field. It’s really about who you are as a person and can you help me do what I need to do to promote my product, business, or organization. An athlete should understand who they are and what they have to offer. And for the introverted, benchwarmer on the football team? Time to develop an alter-ego and get your extroverted friend to promote you.

RELATED: Why non-sports brands should hire athletes to endorse them on social media

How to be an Agent when You’re just a College Freshman?

Every college student who has the love of sport but can’t walk and chew bubble gum, should be sending Godiva chocolate boxes to the Supreme Court justices. NIL has opened the door for you and your roommate, the sharpshooting guard on the basketball team, to get paid! Most college athletes probably won’t have the time, or energy, to promote themselves around town for engagements and endorsements. They have practices, games, and hopefully classes to attend to stay eligible to play (and reap the NIL benefits). They will need an “agent” to help them out. That’s where a fellow student (or any individual who is aspiring to be a sports agent) can step in and do the leg work for that athlete. You develop the connections, you find the athlete, and you put the two together for a price.

What will be key for a player and a new agent to be successful is to have a plan. An athlete and agent seeking endorsement deals have to see it as a business. Understand what the athlete has to offer in terms of their image. Just because they are the star quarterback doesn’t make them personable. Then again, the most personable player on the team may be the kicker. An aspiring agent should approach an athlete with a plan and contacts in their hip pocket ready to go. See what businesses in the community support the school and its sports teams. How can you find this out? Look on the scoreboard and in the stadiums. Schools plaster any available space on their playing fields with ads from local restaurants, businesses, banks, you name it. Those are the businesses you seek out for endorsement opportunities because you know they already have skin in the game. Build a portfolio of opportunities for athletes and then build a website that presents these opportunities for the athlete to see.

If you are internet savvy and know the ends and outs of apps like Tik Tok, Instagram, Twitter, and SnapChat, that’s a big plus. So much of today’s business is done over social media that a person can become a marketing force and make tens of thousands of dollars because they have a large following. If you can develop relationships with players and build their following on social media, then you can approach businesses for endorsements. The trend now is for athletes to take pictures of themselves entering the stadium or working out. A top athlete at a major school like Alabama, or Ohio State can swing their own endorsement deals with athletic clothing companies to wear their items in that “entrance shot”. An athlete at a smaller school can wear a t-shirt promoting a local bar or restaurant in their social media videos. The bigger the social media imprint, the bigger the company you will attract, and the bigger the fee you can command. The nice thing about being an internet promoter is that it won’t interfere with the athlete’s schedule. They can shoot and post things at their convenience and it can have an international impact. The other bonus is that an athlete doesn’t have to be a star on the field to be a star on social media. If an athlete can create some sort of interesting persona that is catchy, develop a following on campus, and then have classmates share their posts with friends, they can become an internet sensation.

As an athlete and an agent, you have to be realistic. Alabama St. is not Alabama. The athletes at Alabama St. will not have the same opportunities that athletes at Alabama will have. But that doesn’t mean they can’t create their own niche and their own market. A star athlete at Alabama St. may realistically have more opportunities to promote themselves than a reserve player at Alabama who never sees a court or a field. Athletes should not be afraid to partner up with each other. The tennis team can seek out NIL deals as a group. There may be a racket club that would be willing to pay them for a photo shoot. The Lacrosse team may score an appearance deal at a local youth tournament. The baseball team can help promote products at a local athletic store. Defensive backs on the football team can make a deal to show up at a local Mexican restaurant every Tuesday evening to promote Taco Tuesday, in exchange for free meals. The deal is what you make it. It is a deal if the athlete, agent, and business get something of value out of it, which in some cases may be a couple of free tacos and unlimited margaritas.

Finally, remember NIL will rapidly develop into a billion dollar industry. Already, professional sports agents, athletic clothing companies, and universities are figuring out how they can control and profit from the NIL of college athletes. High School basketball star Mikey Williams, with over 3 million followers on Instagram, has signed with Excel Sports Management. The same agency that reps superstar athletes like Tiger Woods and Blake Griffin. UConn basketball star Paige Bueckers trademarked her nickname “Paige Buckets” and has lined up a six figure endorsement deal with a Canadian nutrition company. Incoming Tennessee State basketball player, Hercy Miller, son of rap mogul Master-P, signed a $2 million endorsement deal with a tech company called Web Apps America. More of these types of deals will come as agencies develop their platforms to market college athletes in a 360 degree way.

For the little fish in the big pond, understand that there are plenty of opportunities available for you. Don’t feel like you have to get the five star football or basketball player. Don’t think that you can only make money if you are a male athlete. Don’t feel shut out the game because you are playing at Division III Oberlin. Find your niche and exploit it. Ultimately, it will boil down to hustle and creativity. The more hustle you have to find deals and the more creative your mind is to see how to best market your talent, you will prosper in this new frontier of the NIL game.

Power to the Players

Special Thanks to our Guest Author: Jeffrey S. Williams

In a part of town where basketball is king and police are often considered the enemy, one cop, armed with a coaching staff of 4 other law enforcement agents and some dedicated civilians,  transcends his role as a policeman to unite a community and coach his high school alma mater to championship heights.

Donate to support the film here. 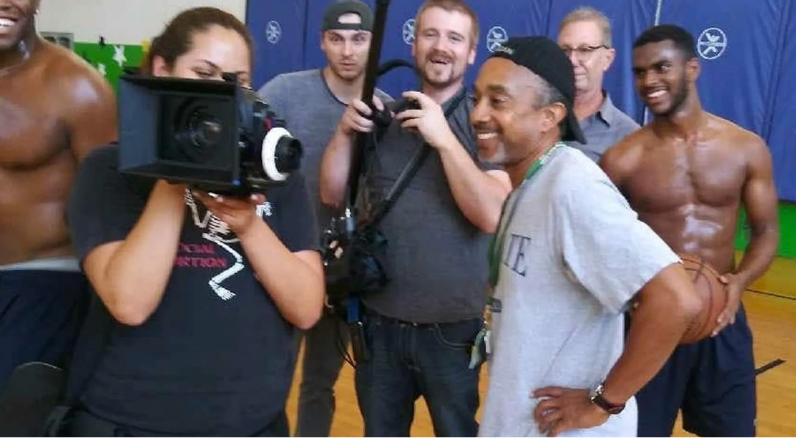 Songs with Brand Names in the Lyrics

What is Branded Entertainment